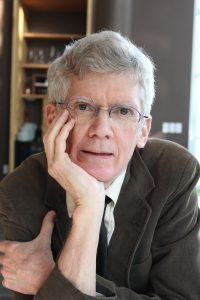 We work with Epstein-Barr Virus (EBV) because it causes several different cancers in people. EBV is a herpesvirus that causes the common, benign infectious mononucleosis, as well as lymphomas such as Burkitt’s Lymphoma, most B-cell lymphomas in immunocompromised hosts, and carcinomas such as nasopharyngeal carcinoma. We study EBV both to understand its contributions to these diseases molecularly and to develop rational means to treat them.

Our research focuses on two facets of EBV pivotal to its inducing and maintaining human tumors. One gene product of EBV, LMP1, mimics cellular signaling pathways but in a ligand-independent manner. Its signaling drives proliferation of EBV-infected B-cells, but at high levels inhibits that proliferation. We are dissecting the mechanisms by which LMP1 regulates its host cell both positively and negatively. A second gene product of EBV, EBNA1, binds several elements of EBV’s origin of plasmid synthesis, oriP, to mediate the synthesis and maintenance of the viral replicon in proliferating cells. EBV’s replicon replicates once per S-phase and uses the cell’s DNA synthetic machinery to do so. We study EBNA1 and oriP to elucidate the mechanisms by which EBV DNA is synthesized and segregated to daughter cells. We also study this viral replicon to gain insights into how EBV subverts its host’s synthetic machinery to support extrachromosomal DNA synthesis. Finally we are studying EBNA1 which not only mediates replication of EBV’s replicon, but also inhibits apoptosis in infectious B-cells to understand its roles in supporting survival of EBV-associated tumors. We want to target EBNA1’s survival functions to develop treatments for tumors caused by EBV.