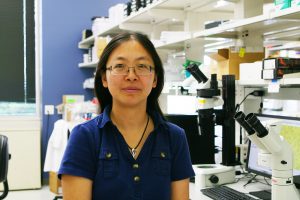 The most fascinating feature of adult stem cells is their ability to replace themselves through many, but limited, rounds of self-renewal while also generating more differentiated progenies to constitute part of or entire tissues. When oncogenic mutations accumulate in normal stem cells, limited self-renewal evolves into “indefinite” self-renewal in prospective cancer stem cells. This leads to tumorigenesis in several organs.

My laboratory focuses on studying the mechanisms underlying the normal as well as oncogenic self-renewal of stem cells using the hematopoietic compartment as a model system. The hematopoietic system is one of the best tissues to study normal stem cells and prospective cancer stem cells; the developmental hierarchy of normal blood formation is well defined, hematopoietic stem cells (HSCs) can be highly purified based on their characteristic immunophenotypes, HSCs can be cultured in vitro, exogenous genes and shRNAs can be readily introduced into HSCs, and stem cell activities can be assayed by in vivo repopulation experiments in mouse. HSCs constantly make a choice between self-renewal and lineage differentiation, and the lineage-committed progenitors make a decision to proliferate, differentiate, or undergo apoptosis. This balance is critical because, once the balance is tilted towards “indefinite” self-renewal at the expense of normal terminal lineage differentiation, normal hematopoiesis evolves into hematopoietic malignancies.

HSCs are regulated by cell-cell and cell-extracellular matrix interactions as well as by cytokines acting through their receptors. One of the molecules we have been studying is K-ras. K-ras is one of the most frequently mutated genes identified in human patients with various hematopoietic malignancies. The oncogenic mutations in the K-ras gene are acquired either as the first genetic change (1st hit) during leukemogenesis or one of the later genetic changes during leukemia progression. However, its precise roles in leukemogenesis and leukemia progression remain elusive. Using recipient mice transplanted with bone marrow cells expressing oncogenic K-ras from its endogenous promoter, we found that oncogenic K-ras mutations induce hematopoietic malignancies in multiple lineages. Based on our preliminary results, we hypothesize that when oncogenic K-ras mutations act as the 1st hit in leukemogenesis, its primary target is HSCs. Oncogenic K-ras mutations further co-operate with additional genetic change(s) occurring in lineage-committed progenitors to initiate and maintain hematopoietic malignant phenotypes. Current projects include: