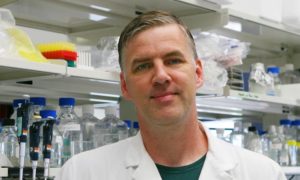 Our research focuses on the molecular biology of Epstein-Barr virus (EBV) nuclear proteins, their role in the virus lifecycle and the pathogenesis of EBV associated malignancies. Herpesviruses infect their hosts for life and EBV precisely manipulates growth and survival signaling pathways of B lymphocytes, resulting in their immortalization. Understanding the mechanisms that EBV has evolved to exploit infected cells is an important basis for therapy of EBV associated diseases and offers a unique vantage from which to view and understand complex cellular pathways.

EBNA3 proteins in EBV latent infection. EBV expresses four nuclear proteins (EBNA2, EBNA3A, 3B, and 3C) that target a single DNA binding protein in the Notch signaling pathway. This protein, called RBP-Jk (also CBF1 or CSL), binds to the DNA sequence GTGGGAAA and is normally complexed with repressor proteins that render it transcriptionally inactive. In the Notch signaling pathway, the intracellular portion of the Notch (ICN) receptor is released upon ligand binding. ICN travels to the nucleus, binds to RBP-Jk, displacing the repressor complex and recruiting the activator protein Mastermind, resulting in transcription of Notch regulated genes. The EBV nuclear protein EBNA2 mimics ICN, binding to RBP-Jk and upregulating expression of EBV latent genes and many cell genes usually regulated by Notch.

The EBNA3 proteins are also expressed during latent infection of B cells and bind to RBP-Jk with their highly homologous N-terminal domains. The EBNA3 proteins can compete with EBNA2 for RBP-Jk binding and repress EBNA2 activation of the EBNA (Cp) promoter. Thus, one role for EBNA3 proteins may be to limit “feed forward” upregulation of EBNA2 expression. This shared ability to compete with EBNA2 is unlikely to explain the unique roles of EBNA3A and EBNA3C in promoting lymphocyte growth. Although non-transcriptional activities of the EBNA3 proteins have been proposed to explain this requirement, our recent studies suggest that EBNA3 proteins are, like EBNA2, manipulators of the Notch signaling pathway. We have shown that EBNA3A, 3B, and 3C regulate distinct subsets of cell genes. Further, we have demonstrated that EBNA3A and EBNA3C mutants unable to bind to RBP-Jk fail to support B lymphocyte growth. Our data suggests that the complexity of EBV RBP-Jk binding proteins (EBNA3A, 3B, and 3C) exists in part to “fine tune” the strong positive signal initiated in the Notch pathway by EBNA2.

LF2 protein in EBV replication (lytic infection). EBV replication is controlled by two immediate early tranactivators, Rta and Zta. In a genome wide screen designed to identify all interactions among EBV proteins we discovered that Rta interacted with LF2, an EBV protein of unknown function. LF2 is encoded by one of three genes (LF1, LF2, and LF3) present in wildtype EBV, but deleted from the EBV reference strain, B95-8. We subsequently discovered that LF2 profoundly inhibited Rta’s ability to upregulate EBV replication genes. In cell based assays, LF2 can inhibit EBV DNA replication, lytic protein expression, and production of extracellular viral particles (virions), normally induced by Rta. LF2 homologs are present in all gamma herpesviruses sequenced to date and are incorporated into virions of many of these viruses, including the Kaposi Sarcoma Herpesvirus (KSHV). We speculate that LF2 homologs are incorporated gamma herpesvirus particles to prevent replication upon initial infection, just as alpha and beta herpesviruses incorporate transcriptional activators into their virions to promote it.